USABloggen.se
Tags: Assadregimen, Samar Yazbek, Syrien, The Crossing: My Journey to the Shattered Heart of Syria. 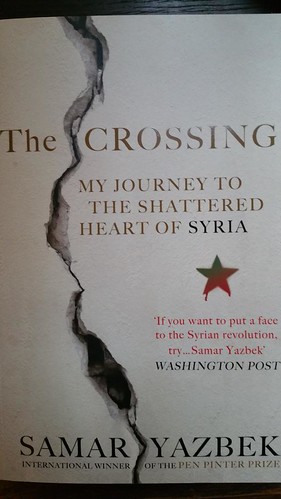 Först kom A Woman in the Crossfire: Diaries of the Syrian Revolution år 2012 och nu har Samar Yazbek just publicerat The Crossing: My Journey to the Shattered Heart of Syria.

Economist recenserar Samar Yazbeks bok The Crossing: My Journey to the Shattered Heart of Syria.:
The Syrian war. Divided country, divided narratives. The struggle to paint a fair portrait of Syria’s agony

She is not blind to the changing nature of the war, as it has turned from a peaceful uprising to an armed, and increasingly religious, conflict. She fears the danger not just of jihadists but of the growing devoutness of ordinary civilians left with nothing to turn to but their faith. Yet in her book, bursting with Syrian voices, the revolution to overthrow the Assad regime continues. One woman, who pleads with Ms Yazbek to tell the world what is really happening, tells her she will never “kneel” to Mr Assad. “I’m going to get pregnant every nine months and keep having children so that we don’t become extinct,” she says.

Her trips show why: the brutality of the regime is evident on every page. In rebel-held Syria the unimaginable is now the norm: children without limbs; whole families wiped out in barrel bombs; playgrounds turned into burial grounds as cemeteries fill up. Through snippets of these people’s lives Ms Yazbek does the important job of putting faces to the numbing numbers of Syria’s crisis: over 200,000 dead and 10m displaced. Amid the rubble, many Syrians have an incredible sense of social solidarity and they find ingenious ways to survive. It is impossible not to share her anger at “the great injustice that had fallen on us as a people and a cause”.

Ms Yazbek does much to make Syria better understood; her book is gripping. Mr Glass’s feels more hastily written and polemical. One can only hope that more Syrians, with better access to and understanding of the country, write their stories. Their take on the war needs to be heard.

It is a wary way for a novelist to behave, but then she is an unusual sort of novelist, and her latest book is not a novel. A Woman in the Crossfire is a diary, a feverish, nightmarish, immediate account of four months in the middle of last year, which she spent demonstrating against the Assad regime in Syria, until the threats and intimidation made it impossible. She then moved with her daughter from flat to flat, never quite ahead of the security forces, who detained her five times. She interviewed protesters, doctors, neighbours and defectors about what was happening in the streets, prisons and hospitals of her country, what they saw and what was done to them, often finding that after they had talked to her, they disappeared. She never pretends that she is being heroic, although her persistence sometimes feels foolhardy. This week the book was awarded the PEN Pinter Prize, given annually to a British writer who, as Harold Pinter put it in his Nobel speech, casts an “unflinching, unswerving” gaze upon the world (this year, Carol Ann Duffy), and shared with an international writer who has been persecuted for speaking out about their beliefs. It is drenched in fear and grief. She chain-smokes, weeps and screams through it, and cannot sleep without tranquillisers.